About the book –
Best known as the leader of India’s first successful Everest expedition in 1965, Captain M.S. Kohli’s autobiography is a tour de force that traces his journey as a young boy amongst the quiet peaks of haripur, in north-west frontier province, to his near-death experience during the Partition, to his rise up the ranks of the Indian Navy and the Indian mountaineering Federation.
A life and experiences defined by honesty, simplicity and team spirit, his skill as a mountaineer was put to test when, working as an intelligence operator, he was involved in the clandestine mission in 1965 to place plutonium powered monitoring devices on Nanda Devi and Nanda kot.
From heading secret missions to leading various successful expeditions to the Himalayas, his story of utmost courage and adventure is fascinating and highlights what he has always believed in – safety of his men and honour of the country. 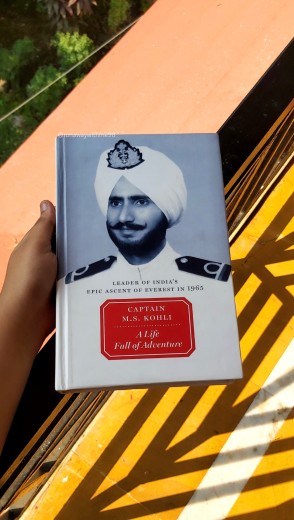 Review –
Let me start off my reading experience by saying that we all need to read this book. The autobiography of Captain M. S. Kohli is divided into 26 chapters, being almost 316 pages long hardcover.
The first few pages of the book talks about his never-ending and dangerous journey from Pakistan to Delhi during the partition period which where he succeeded to stay alive but at a prize of seeing hundreds and thousands of people being killed in front of him and how his and his father’s faith in God always proved positive.
My heart ached while reading the partition story and how people were killed, being the worst phase of mankind. I did not hesitate to shed a tear for them.
Captain M. S. Kohli picked up his studies post the partition where one thing led to another and he being a public figure leading a huge crowd for against injustice. Post his completion of studies, Captain M. S. Kohli got admitted in the Indian Navy. So how did a Navy Officer end up climbing mountains? What followed thereafter? How many times did he encounter death but survived? Where did life take him? Where did passion and faith take him?
If you are history enthusiastic, pick this book up without a second thought. This book will give you a personal touch by Captain M S Kohli through his journey. I learnt a lot about family love and importance of family love, about patriotism and most importantly, I learnt about the power of faith. The power of prayers.
About the Author –
Steeped deep into adventure since birth in 1931 and having survived endless encounters with death during the Partition in 1947, Captain M.S. Kohli carved out a spectacular career of 42 years spanning the Indian Navy, Indo-Tibetan Border Police, and Air India.
He introduced white-water rafting, aero sports, international congresses, luxury sea cruises, and tourist charters to Goa, Lakshadweep and the Andaman islands. He is a recipient of several national and international honours including the Padma Bhushan, the Arjuna Award, and Tenzing Norgay Lifetime National Adventure Award.
– Kinjal Parekh
youtube.com/c/KinjalParekh

Site changed - https://kinjalparekh.in/ - Hi, I’m Kinjal Parekh from Mumbai, India and I love to read books. When I started with my book blog, I did not realise that my passion to read will take me up this far that I would end up diversifying my reading picks, discover new authors, start with my YouTube channel and also end up as an idea-tor with Flipkart. So here is where you will find everything related to books and otherwise! Feel free to contact me for collaborations. E-Mail ID – parekhkinjal@gmail.com View all posts by Kinjal Parekh